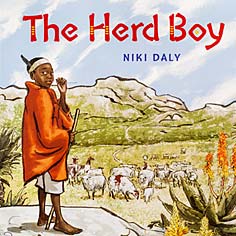 In rural South Africa a young boy tends his grandfather’s flock. This can be a dangerous task as baboons wait on the high rocks for their chance to claim an easy meal.

Puffadders sleep in the grass and deep dongo’s which the sheep and goats might fall into must also be avoided. Malusi has to be alert and brave to keep them safe in the mountains each day.

This is a story of empowerment, self belief and leadership inspired by the life of former president Nelson Mandela. 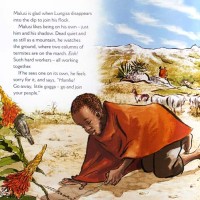 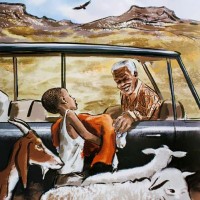 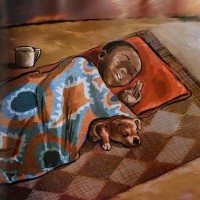 Malusi has a friend called Lungisa. The herd boy is older than Malusi and has his own dog Koko. The two boys often play football and stick fighting while the flocks graze. Lungisa is a champion footballer and stick fighter who wants to play football for Bafana-Bafana when he goes up.

Malusi has his own dream. He wants to be President. Even though the older boy always gets the better of him, Malusi uses clever tactics to buy time and his determination to try to beat Lungisa.

When a hungry old baboon attacks the flock he stands his ground and calls for the help of Lungisa. Koko is quicker to arrive and scares the baboon away. The herd boy wishes he had a dog like Koko.

Singing they return home carrying the injured lamb, but as they come down the hill a shiny car is coming along the dusty road. They meet the passenger an old man who tells them that he was once the herd boy too. “What do you boys want to be when you grow up?” he asks. ‘He wants to be President” says Lungisa giggling.

The old man see the lamb Malusi has been carrying and says “Ah, a boy who looks after his herd with make a very fine leader. Sala kahle, Mr President”.

Vivid illustrations of depth and beauty transform this story into an experience of indelible power and inspiration.

The wilderness is dramatic and raw as Nicky Daly chooses perspectives which give dominance to the mood of each page.

We see the baboon’s eye view of the village far below and an ‘eye level’ view of the boys stick fighting, which will engage children in the drama.

Flowers and creatures from the natural surroundings are woven into the story both visually and in text, adding context to the boys experience of being alone in the wild all day.

Local language is used to describe landforms, food and greetings. References to things that go on in the community like the meals that are eaten and the swapping of dung balls for fresh vegetables add valuable background to this well developed story.

Children can learn a lot about cultural diversity and of course gain inspiration from the main theme of the story which is that great leaders can come from humble beginnings.

There is an uplifting end to this tale which will make children smile with delight.

Niki Daly is a South African author-illustrator whose picture books celebrate the imaginative powers of children and their magnificent everyday lives.

As a writer, editor, and provider of art workshops, Niki Daly has furthered the creation of a body of South African children’s literature inclusive of all races and ethnic groups.

Follow the link to find out more out this Author/Illustrator.
Read More