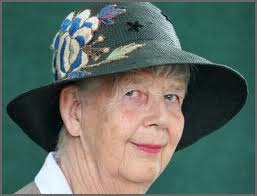 Shirley Hughes is one of the best-loved and most innovative creators of books for young children.

She has written and illustrated over 50 books, sold more than eight million copies, won major awards and created some of the most enduring characters in children’s literature, including Lucy and Tom.

Shirley was born and brought up in the Wirral, in the era of George Formby, the Liverpool Blitz and the G.I. invasion of Lancashire. Shirley fondly remembers childhood visits to the cinema and to the Liverpool Playhouse and the Empire, where such performers as Noel Coward would appear prior to a London run.

“I want the children looking at my books to feel that they want to see round the corner, I want them to feel they are in the picture they are looking at.”

She trained at Liverpool School of Art and the Ruskin School of Drawing in Oxford. “I had a good training in figure drawing, and acquired the lifelong habit of keeping sketchbooks and illustrated diaries,” says Shirley.

Her ambition was to be a set designer, but a brief experience as a dogsbody at the Birmingham Rep changed her mind. Nevertheless, the influence of theatre remains in Shirley’s work. “Writing and illustrating,” she says, “is like being a stage director and a troupe of actors all rolled into one.”

Shirley began her career in children’s books by illustrating for other authors. Her first big break was with The Hill War – a book about the Scottish moors, which required a lot of line work.

The book led to work illustrating fairy tales, which in turn yielded a commission to illustrate a book by Noel Streatfeild. This went extremely well and brought Shirley the chance to illustrate the latest title in Dorothy Edwards’ popular My Naughty Little Sister series. This collaboration proved so successful that Edwards asked Hughes to re-illustrate all the existing titles in the series.

Shirley’s professional and private life came together as she raised a young family and gained first-hand experience of how children behave and what they like to read. This influenced the first book that Shirley wrote as well as illustrated – Lucy & Tom’s Day, published in 1960.

“Even very small readers can develop a strong loyalty to fictional characters once they have taken them to heart. I learned that through reading with my own children.”

As Shirley says, “at that time… there weren’t many books for young children about real life – what it feels like getting up in the morning, going to the shops, having lunch and so on.” This idea proved so popular that Lucy and Tom became a series, which continues to evoke feelings of warmth and familiarity amongst readers.

“My books have grown out of real situations. They are mostly set in a city background – my own part of London to be exact. The domestic details are very local and English, but I hope the themes are fairly universal.”

In 1977, Shirley won the Kate Greenaway medal for Dogger, another tale of an ordinary and yet monumental family incident – the loss of a much-loved toy. Shirley’s Alfie books also draw their appeal from familiar elements. In 1984, Shirley Hughes received the Eleanor Farjeon Award for distinguished services to children’s literature. In 1999, she was awarded an OBE.

Shirley’s daughter, Clara Vulliamy, is herself a picture book creator. In August 2013 the pair published their first children’s book together, Dixie O’Day In The Fast Lane.

“I want children, however tiny they are, and wherever they live, to use their eyes, to look out and see that it’s ravishingly beautiful out there.”

You can find out more about Shirley Hughes at this link on Wikipedia. 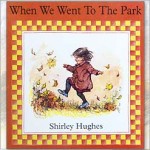 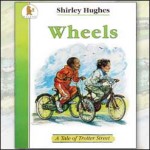 Shirley’s Other Books Are Available at the links below.