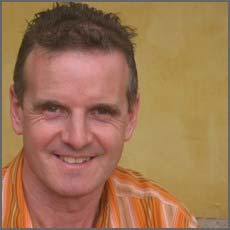 Sean Taylor is a British children’s author, storyteller and teacher. Sean has taught in three continents and draws from his experience in creative writing and poetry to enchant and educate young audiences.

Sean Taylor grew up in a small town in Surrey, England. “I lived in a big, quiet house with tall trees around it which, I suppose, gave me some space to think.”

“I loved stories as a boy. I imagined everyone’s dad read Treasure Island to them, and everyone’s mum would take them to the bookshop and say, “Choose two books you like.” Now I realize I was very lucky to have parents like that.”

After he finished school Sean worked as a secondary teacher in Zimbabwe before completing an English Literature degree at Cambridge University.

“One of the reasons why I write for young people today is because it’s now clear to me that going on adventures to wild, new, imaginary places in stories is as important as learning how to spell.”

“My first book was published in 1992. It was a collection of poems for adults. And around that time, I started to get invited into local schools to lead poetry workshops for children. I enjoyed doing it so much that I began to write for, and about, the children around me.”

His other titles include, Crocodiles are the Best Animals of All!, The World Champion of Staying Awake, The Grizzly Bear with the Frizzly Hair, Huck Runs Amuck!, Who Ate Auntie Iris?, The Ring Went Zing!, Tickling Tigers, When a Monster is Born and his recent hit We Have Lift-Off.

In December 2007, his book When a Monster is Born, illustrated by Nick Sharratt, won a gold medal in the Nestlé Prize for works for children five years old and under.

However, Sean Taylor turned down the prize money from the sponsor, Nestlé, because of “questions surrounding Nestlé’s marketing of breast-milk substitutes”.

“Being on the short list for the 2007 Nestlé Children’s book Prize is a significant honour for me, especially since so many children around the country have been involved in choosing the winning books. And I am delighted to accept the award offered to me.”

“However, because of questions surrounding Nestlé’s marketing of breast-milk substitutes, I do not feel able to accept the prize money.”

In January 2008, Nestlé withdrew from the 23 year old sponsorship role of the Booktrust administrated prize for children’s writing.

He lives with his wife Adriana and two sons Joey and Rafael. They spend some time in England and some in Sao Paulo, Brazil where Adriana is from.

2007 Winner of the Nestlé Prize for works for children five years old and under for When a Monster is Born.

2007 Winner Pluim van de maand (Feather of the Month) for Dutch edition of When a Monster is Born (Als er een monster is geboren).