She was born in Princeton, New Jersey in 1943 and grew up in Baltimore. Her parents both worked in the medical field which introducing Molly to science, medicine and illustration from an early age.

“All through the years I was growing up, my parents had given each other copies of books illustrated by the great British illustrator, Arthur Rackham, and I had spent hours and hours of my childhood looking at his pictures. I dreamed that someday I would make pictures as magical and entrancing as his.”

Molly Bang received her bachelor degree in French from Wellesley, which later in life helped her get a job as educator for a public health project in French-speaking Mali, West Africa. Molly spent a year there in 1980-81, writing and illustrating stories. These were designed to help educate people on maternal and child health.

She also worked as a reporter and as an educator for public health projects in Bangladesh, illustrating for UNICEF.

After college graduation in 1965, Molly went to Kyoto, Japan and taught English. When she returned to the States she completed a Masters in Far Eastern Studies at the University of Arizona and at Harvard.

Like many illustrators starting out she was told that her illustrations “didn’t fit” any writer’s writing, and that perhaps she should write her own stories. Thankfully she did! 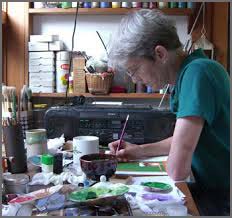 Molly’s dedication to educate and inspire has see her create many award winning titles.

“In the past 10 or 15 years, I have become more concerned about American children’s lack of knowledge about even the most basic scientific principles, and I’ve written four books about science in an attempt to help change this.”

These include Common Ground which won The Giverny Award for the best children’s science book of 2000 and My Light which was chosen as an ALA Notable and won the Massachusetts Book Award for Children’s Literature in 2005.

When she became a mother she made Ten, Nine Eight, Dawn and When Sophie Gets Angry—Really, Really Angry.

Her understanding of ‘how pictures work’ gives her style of storytelling a unique and powerful lens which communicates beyond the limitations of written language.

“Her only work for adults is Picture This, which shows how an understanding of
the most basic principles enable a person to build powerful pictures. It is
used by art and graphic departments in colleges around the country.”

Molly Bang is an exceptionally powerful voice in children’s literature, who’s books we encourage you to explore.