Kristina Stephenson is a writer, illustrator and designer.

As a child she loved making up stories and making a mess with paper, paints and glue. She loved film and television only later developing a passion for theatre. She wanted to be an actress, singing and dancing in musicals. Sadly she was too shy to take it on.

After school she trained as a set and costume designer at the Central School of Art and Design and had a successful career in theatre and Children’s Television for BBC and Channel 4 until she had her children.

She then began illustrating non- fiction books and was inspired to write her first children’s picture book by her son Charlie. Thus began the adventures of the bold, brave Sir Charlie Stinky Socks!

Kristina Stephenson now lives in Wiltshire with her husband, who is a musician, her daughter, her son, a dog, two cats and a tortoise.

She juggles work with family life in a busy, bustling house and writes her stories in an old turquoise VW camper van called BRU. She loves her work, but she still loves the theatre and she’s not as shy as she used to be, so … who knows. 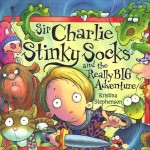