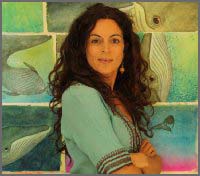 An explorer at heart, Gianna’s worked her talents after graduating from high school and in order to afford her many journeys, She had several jobs at once: apprenticing a muralist, a jewellery designer, a product designer and driving horse carriages through the park. Gianna explored many corners of the world, from Africa and Asia, to the South Pacific and Europe, to crewing on sailboats in the high seas.

At work and school, she became known as “Boomerang”.

Gianna finally landed a full-time freelance job designing toys for children, but after several years in a corporate box with no windows, she left for good and began painting, illustrating and writing books.

“I have always been fascinated by the sources of our ideas for stories, especially stories for children — written by adults, sometimes for children and sometimes, in my case, for more personal reasons.”

While thinking about this, I came across a telling word:
Underbelly – “A vulnerable or unprotected part, aspect, or region.”

“This led me to revisit the most powerful, meaningful, and touching stories from my childhood, the ones that made me laugh out loud or the ones that scared me or those that reminded me of a sweet, long-forgotten childhood memory.

How, I thought, could I do that in my stories? How could I touch that underbelly for my readers and be vulnerable in my writing?”

Meet me at the Moon, was written in response to a dream Gianna had after she had heard the news of her own mothers serious illness. Her work is notable for both its visual beauty and emotive depth.

Gianna has written and illustrated numerous articles for travel and leisure magazines. Though she still wanders the world, Gianna now lives in Northern California and works full-time writing and illustrating. 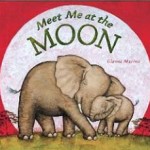