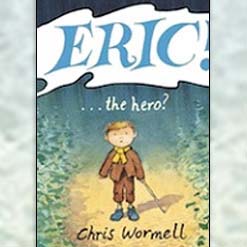 Everybody is good at something, even little Eric. Eric the Hero is a simple but tender story of a lonely boy who gets called names until he believes they are true.  He soon finds out that he is not the only one who is running away from home. Something fearsome is coming out of the forest! As the villagers rush to the safety of a medieval castle, they shout, “Someone would have to be a ‘Dunce’ or a ‘Dummy’ or a ‘Hero’ to challenge whatever is coming out of the forest.” But wait… those are the names that Eric has been called…does this mean Eric is also a hero? Standing his ground Eric faces the unknown. 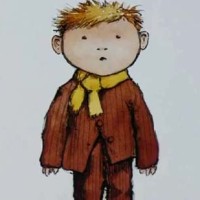 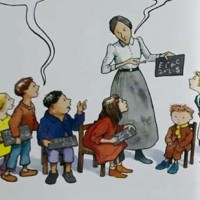 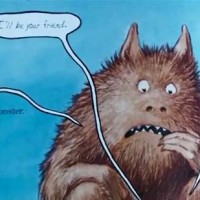 An unlikely friendship is struck with a monster who reveals that he has also been called a dummy and a nitwit and well, he’s not very good at being a monster! Crisis averted and hero status attained. Eric’s differences turn out to be his special something! Chris Wormell’s clever use of shadows lifts his cartoonish characters right off the page in Eric the Hero. A little ‘pick me up’ for kids who may feel that they don’t fit in or can’t do things as well as others. Personally I’m not a fan of the use of derogatory words in this story but I can see this approach could incite empathy if a child was being bullied.

Christopher Wormell reads Eric the Hero
Author: CHRISTOPHER WORMELL Christopher Wormell is one of Britain’s finest wood engravers, principally known for his illustrated books. His first children’s book, An Alphabet of Animals, published in 1990 won that year’s Graphics Prize at the Bologna International Children’s Book Fair. Follow the link to find out more out this Author/Illustrator. Read More